You might have known about this small but deadly animal, but you know where do weasels live? Well in this article we are going to discuss the habitat, behaviour and few interesting facts about the weasel.

These small members of genus Mustela are known as active predators with long as well as slender body and small legs. The few more members of this family are mink, martens, fishers, wolverines, badgers, and skunks. They may look cute and cuddly but they really are small beasts. They are a small-sized carnivore and found on every continent except Australia.

Weasels are usually found in black, brown or grey colour with yellow or white shades.  They have a cylindrical shape of body and neck, slender and long body that helps them to follow their prey into burrows. Their underparts are usually creamy white. Weasels have a really sharp eye set and excellent hearing ability which they use in hunting the prey.

Weasels shed their fur twice a year, in the spring and in the fall. They shed in response to changes in day length. The fur of weasels in northern parts become white in the winter and brown in the summer, while those in southern populations mostly remain brown year-round.

The size of weasel varies in length from 6.7 to 8.8 inches. Females are found smaller than males and usually have red or brown colour of the upper coat and white in bellies.  The tail can be 1 to 2 inches long. Their weight is counted between 120 to 200 g and weasels can run with the speed of 25kmph. An average weasel can live between 1 to 3 years.

Where Do Weasels Live?

Weasels live in various habitats, mostly in open fields. Weasels are the smallest mammals of the Mustelid family which primarily live in North America. They are mostly found in central and western Europe and are very common in England and Scotland. According to the International Union for Conservation of Nature and Natural Resources (IUCN), the habitat and ecology of weasel belong to Shrubland, Artificial/Terrestrial, Wetlands (inland), Grassland, Rocky areas (eg. inland cliffs, mountain peaks) and Forests.

There are 17 different species of weasel found worldwide and the colour, size, features, and behaviour vary according to the places they live. Most of the species are commonly called weasel.  European Weasel (long-tailed weasel) and the Least Weasel (Mustela nivalis) are the most common species which is found and spread across the northern hemisphere. Weasels are the smallest carnivorous mammals live in this world. These vicious predators are closely related to the stoats. But weasels are usually smaller in size and stoats are recognized through the black tip at the end of their brown tail.

Where Do long-tailed Weasels live?

Long-tailed weasels are mostly found in temperate and sub-tropical regions in central and North America. Their range is spread in from wooded areas to crop fields of farmers, as well as even to many suburban areas. We have known about where do weasels live but they are abundant from the desert and from large and dense forests. They make burrows and nests in rocks, hollow logs and under barns. Besides that, instead of making a new nest, they may sometimes live in the burrows made by other rodents.

The weasel’s habitat mostly in forests and grasslands but they are spread so broadly. They are killed by and poisoned by farmers as they are harmful to human assets. There are few areas, which have been affected by habitat loss because they are seen as pests by farmers and killed by humans. According to the Nature Conservancy, the winter fur of the least weasel glows a bright lavender colour when exposed to ultraviolet light. The weasels have actually adapted the environment changes that occurred by humans very well.

What do weasels eat?

Weasels are truly carnivorous and their main prey is rodents and mice. Apart from that, weasels love to eat voles, shrews, rabbits, rats, chipmunks and other small mammals in their habitats. Weasels often eat birds, eggs, fish, frogs, and insects as well. According to the Animal Diversity Web, weasels are the smallest mammals in the world.

How do weasels hunt?

The musteline mammal is a consummate and furious hunter that’s able to really enter the burrows of its prey that is something which other predators are unable to try and do. By trailing little mammal’s exploitation the tunnels that they create through the copse and even beneath the snow, the musteline mammal is in a position to follow its victim back to its burrow then catches it within.

We know, where do weasels live and rodents like Mice and Voles, alongside Lemmings any north, compose the majority of the Weasel’s diet apart from the occasional bird. They’re additionally better-known to eat eggs and are able to kill animals larger than themselves like Ducks and Rabbits.

How many Weasels Can Eat?

Though the musteline mammal could also be the right form to urge into little burrows, their long body covers a comparatively massive extent then loses a great deal of body heat. So as to confirm that they need enough energy, Weasels should eat around a 3rd of their weight each day to survive resulting in them being such prolific hunters. By eating the rodents and rabbits, they control the overpopulation and they play a really crucial role in the ecosystem.

The mating season begins in the mid-summer months. After the mating process, implantation of the embryo is delayed and the egg does not begin to develop until March. The gestation period remains around for 5 weeks and the female gives birth to 1 to 8 offspring per litter in her burrow.

The young weasels are born with the weight of about 3 grams and with eyes closed, and with pink, wrinkled skin and white fur.  The females usually have two litters per year. Young weasels develop quickly. By the time they become of two months, they are able to hunt small rodents and prey. In the next 2 to 3 weeks, the will leave their mothers and establish their own territory.

Weasels are really small but hungry for blood. Have you seen them roaming in your area or in you know where do weasels live?…well if you know anything about them, you can share with us. Let us know if this article is helpful and informative for you below in the comment section. 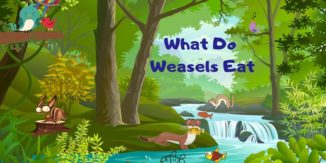