Have you ever encountered a coyote…..? maybe or maybe not? If your question is, do coyotes attack humans…? Then this post is going to be very informative and helpful for you in both of the conditions. Yes, coyotes do attack humans but very few. There are conflicts between humans and coyotes since they have entered urban places.

Coyotes attack humans very rarely. There are only two confirmed deaths a year in Canada and the United States. Normally they are timed and confine themselves to rural and forest areas. They are now surviving in urban and other populated areas. But it is possible that you may encounter the coyote in the wind or in your neighborhood. 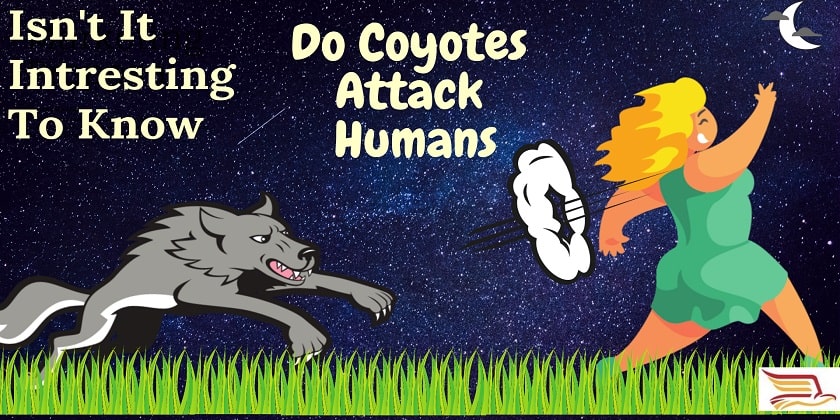 If you are really interested in knowing what do coyotes eat during the day and night, then you love these interesting facts which I include in this post.

Here is the data of coyotes attack on humans:

According to the data of USDA’s Wildlife Services, in the 30 years leading up to March 2006, 160 attacks occurred in the United States. Most of them were in the Los Angeles region. Data from the USDA’s Wildlife Services and the California Department of Fish and Wildlife, show that 41 attacks occurred during the period of 1988–1997. from 1998 to 2003, there are 48 attacks were noted. Their research shows that these incidents majorly occurred in Southern California near the suburban-wildland interface.

According to the Urban coyote research project analysis was conducted on coyote attacks on humans in the United States and Canada, including 142 reported incidents of coyote attacks resulting in 159 victims.

You might have this question, do coyotes attack humans?… Most of the coyotes are no longer afraid of humans. There are reports of increased coyote sightings in the urban and suburban areas according to recent researches. They do not immediately run away when encountering humans and becoming habitual to the presence of humans.

Some coyotes have started to act aggressively toward humans, chasing bicycles and joggers. They have begun confronting people walking their dogs and stalking small children.

Humans increase the likelihood of conflicts with coyotes because they are feeding the animals directly. They are giving them access to garbage, pet food, and other food remnants. Humans are not in the coyote’s diet, but they may readily attack young children that are unattended.

One more interesting fact about this feeder is, they prefer to stay away from large predators, including humans. They commonly “shadow” humans passing through their territory to ensure that if somebody bothers their den.

Some deaths by coyotes attack on humans have been confirmed by experts:

Attacks in which coyote remained unsuccessful to kill the victims:

There are some incidents you have read above. In most of them, the coyote tried to hurt children. Coyotes were afraid to prey on animals bigger in size.

What to do to avoid an encounter with coyotes:

What to do if a coyote attacks someone?

Here are some steps that you can follow if coyote attacks it might help when you encounter this animal:

Let us know in the comment section if this article about does coyotes attack humans is helpful for you. Besides that, you can also share your experience while encountering the coyote.